Long time no post. There’s a number of reasons for that, all of them “overridden” by my laziness. 🙂 I had a strong resolution of keeping good progress with the blog, but reality proved otherwise. Anyway, I am coming back to blogging since there are some ideas started or good to be shared.

First of all, SQL Server 2014 is publicly available since April 2014, and it’s hot. I’m not willing to copy/paste official marketing statements, but In-Memory OLTP (former Hekaton) and buffer pool extensions seem very promising, especially now, when the hardware prices are declining and there is more capacity available (in terms of both hard drive and memory). I tried it at CTP2 stage and I’m going to return to RTM for more testing action – I still haven’t experienced it live in production.
I also have some drafts of XML-related posts – how to process XML in SQL Server and mostly how to extract data to XML. This topic was relevant to me at some point and I had problems finding good comparison with execution statistics. Since I’m revisiting this, I’ll wrap it up in a series of posts.

With a change in my job, I’m getting to know Oracle. I’m responsible for deploying an application that is using Database Engine and is hosted on WebLogic Server (both of them 11g). This is a completely new experience for me, so it’s possible some posts related to those areas, for example transition from SQL Server to Oracle.

Earlier on this year, I challenged myself and passed three exams that are required for MCSD: Application Lifecycle Management. I am starting to think in terms of ALM more and more. Last year I made some experiments with TFS 2013 while it was still in Preview stage, focusing on Continuous Integration and Continuous Delivery. Some time passed – TFS 2013 not only went RTM but already got Update 2 – and it might be reasonable to come back to that as Microsoft is incrementally adding new releases to each update. Another point worth noting here is that Microsoft is giving a TFS to everyone for free at visualstudio.com, of course with limited functionality but even the free plan gives you unlimited projects for up to 5 users, 60 minutes of build and 15000 virtual user load minutes, so a great place to start. 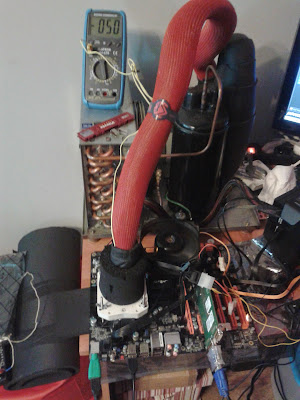 I came back actively to overclocking – I liked pushing an envelope a lot since my beginning with computers. I got myself a single stage phase change cooling unit (which is basically a stripped refrigerator – see the picture to the right) and a load of CPUs and RAM dating between 2002 and 2010. There’s going to be a lot of fun with that and for those who are interested you can follow me on hwbot.

And I decided to finally change the boring Andreas theme to something more modern. 🙂